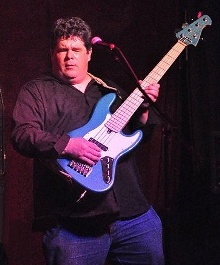 For more than thirty years, Sean has been singing and playing bass guitar. He’s been up and down and back and forth across the United States, with acts ranging from country artists to hair bands to Elvis impersonators. Initially cutting his teeth on bands like Rush, Yes, Kansas, ELP, and the Beatles, Sean attended Alderson-Broaddus college in Philippi, WV until joining his first road act and touring relentlessly (40 to 50 weeks per year) for years. In addition to occasional session work in and around Nashville, Sean has continued performing live for a variety of artists including Troy Olsen, Alan O’Day, Charlotte Medley, Paul Scott, LoCash Cowboys, and now Brian Nutter: “Brian and I grew up in West Virginia in the same neck of the woods, playing in the same clubs, facing the same challenges – it was a great time! A lot of us knew we’d eventually end up in Nashville, and I can’t imagine a better gig than making music with old friends from back home. I really dig Brian’s tunes, his energy makes him a force of nature on stage, and he’s got the best fans anywhere. This has to be one of the best gigs in Nashville!”

Sean uses our DNS-410 to bring the thunder on stage. “David’s cabinets are deep and loud,’ he says. “More importantly, they sound great and have  incredible nuance. I’m proud to be part of the DNA artist family.”