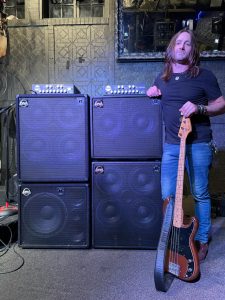 Brian Powell is a Nashville touring and session bassist. In 2016 he moved to Nashville and has been touring worldwide with multiple artists and bands sharing the stage with many great acts, like Clint Black, Ashley McBryde, Zakk Wylde, Joe Diffie, and Lee Brice. He has also been on sessions in some of Nashville and Muscle Scholls’ most prestigious studios. In 2021 Brian will be releasing two full length albums with his 2 bands Resist & Bite and The Richie Scholl Band.

Born and raised in Washington State, Brian was introduced to music at a very early age. His great grandfather was a gifted pianist and he grew up surrounded by an extensive record collection. This is where he fell in love with music of many styles. Brian says, “My Dad wasn’t a musician, but gave me one of the best pieces of musical advice I’ve ever had. He said that if you want to be a professional musician you should listen to all styles of music.” As soon as Brian was able to walk, he learned how to use the record player and discovered Chuck Berry and Pink Floyd. It was pretty much decided what the future held for Brian after that.

Growing up with the Seattle and northwest music scene blowing up around him really influenced Brian to start playing music and joining bands. It wasn’t long before Brian began writing music and touring extensively up and down the west coast with original Rock, Pop, and Country bands. He was also releasing many songs that were published and licensed. His music has been on National Radio, Movies, TV shows, Commercials and Video games. He then started playing Country Music in the Nevada casino circuit, and this point began thinking about Nashville.

After a tour brought him to Music City, Brian was living in Nashville playing for a major label artist within two months. “It just all fell in place for me and Nashville,” he says.

Brian enjoys all types of music and it shows in the diversity of the acts he works with. He admittedly says, “I’m probably not going to be anybody’s first call for Jazz, fusion, or classical recordings.” However one thing that is for certain, if Brian is on bass it will be locked in, down in the pocket, and make you want to move. 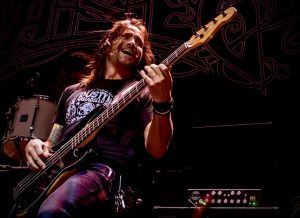 “I really like the diversity of my 1350. From big stages to small and metal to country it’s all in my DNA! I can dial up anything I want to hear with this amp and the cabinets really fill a room and push massive air. I’ve been playing David Nordschow amps for 15 years and was excited to check out his new creation. I’m blown away… David did it again!”