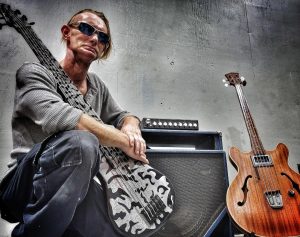 Hailing from the Little Rock area, Zach played his first show on bass in October 1994, with a band he describes as “U2 meets Jars of Clay.”

In the quarter century since, he’s played and recorded all over the lower 48 and Alaska, with bands ranging from metal, punk, folk, R&B, reggae, jazz, country, and more. Citing influences such as Bakithi Kumalo and Steve Bailey, he’s transitioned exclusively to fretless over time.

After having his lower jaw bone replaced due to cancer in 2016 and being told he’d never sing again, Zach proved that wrong less than a year later, stepping on stage with just a mic and a guitar.

Since then, he has begun fronting his own surf/ska flavored project, Zach and the Ameloblasts. He is also currently in the early stages of developing the Luckiest Man Alive Cancer Project, a non-profit entity with the mission goal of organizing, promoting, and staffing benefit events for other cancer patients.

“My two main basses are absolute yin and yang to each other in terms of strings, components, etc. The magical unicorn I’ve sought for years was a single piece of gear that I could plug either into and be 100% happy with the tone, not sacrificing one for the other. DNA has absolutely provided that, and doesn’t leave me any room to hide behind the equipment. My hunt is over!”