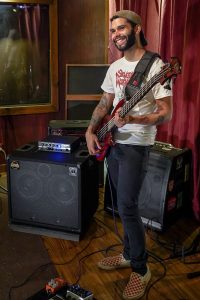 Born on March 30th, 1992 in Bayamo´n, Puerto Rico, Weslie was introduced to the music world when he was ten years old. His passion for music grew so much he decided to start playing bass at the age of fourteen. After being in several cover bands in the Island, Weslie joined ZAFAKON in 2010. While being in ZAFAKON, he solidified his passion for music and the business aspects of it.

In 2012, Weslie joined the Puerto Rican Hardcore/Punk band BICICLETA, which eventually got signed by the Massachusetts Hardcore label Frequency Deleted Records (FDR). In 2017, after parting ways with ZAFAKON, Weslie formed MOTHS, a Stoner Progressive Metal band with jazz influences that has had a great reception locally. He currently holds a monthly series of Bass Cover videos on his Youtube Channel, gaining viewers from all around the world. His great work with the bass guitar has landed him with previous endorsement deals with companies like RG Custom Basses and Stringjoy Guitar Strings.

“The DNS210 is a BEAST of a cab. It can hold all of the distortion and effects I use with no problem and the clean sound is superb. I have been using it with a Tech 21 VT Bass 500 while I wait for my DNA-800 and it carries it so well. It is a very versatile cab and it works perfectly for both, whether if you want to have a very loud, gritty, dirty sound or a very clean, deep, rounded sound, this cab can do it all! Also very portable and efficient. I am hooked!”