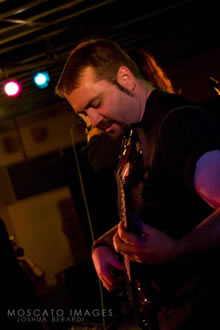 Wes Watson started playing bass after high school at the age of 19. He still remembers when he got his first bass – a Kramer Duke (yes, the one with the aluminum neck!). Ever since, he’s had a love of all notes low.

While Wes is comfortable in a variety of styles, and has played in numerous worship bands and several Rock projects, his passion is for Metal. He is currently the bassist for InnerSiege, playing fretted and fretless bass.

Wes toured internationally with the band he co-founded, StrangeLand, playing throughout the US and Europe, all. For many years, StrangeLand was a main staple in the Metal tent at Cornerstone, both the Illinois fest, and Cornerstone California. Their song “The Enemy Has Fallen” was featured on radio stations both in the US and internationally. When the group disbanded two years ago, Wes and other members formed InnerSiege, continuing where they left off on their rise to international acclaim.

“We have been very blessed to play lots of wonderful places in this band,” says Wes. “God has certainly shined on us, and we are very grateful for the opportunities we have been given. We try not to waste that!”

One thing that has remained consistent throughout Wes’ playing career thus far is the search for the ultimate tone. Like many others, he has found his best tone with the help of David Nordschow, and has been relying on David’s designs for over 10 years.

“David’s amplifiers and cabinets have always been considered the best in the business,” Wes says. “After playing them for more than a decade, I know why: Monster TONE! His designs always bring out the best in whatever instrument I’m playing, be it fretted or fretless basses, live or in the studio. Plus he and Lane have always been wonderful to deal with. David’s my man, and he builds my amps.”