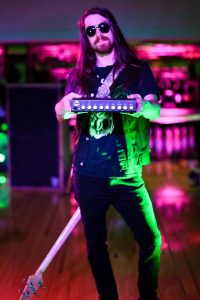 Travis Meredith. bassist for Native Sons started playing music at age 5 with the piano, moved onto the guitar at 15 and then to bass at 21. He’s the former bassist of local Louisville bands Dead Room Cult, Edgar Red and PMA Sound. Travis has performed everything from reggae to death metal (also current bassist for local death metal band Redivider. A road dog, bred to tour!

Native Sons- After acquiring Travis Meredith, Brett Siples and Michael Bowman, Native Sons founding member has infused the group with new blood, passion, and energy. With renewed focus and eagerness to tour, the band is already out supporting their debut release titled “The Natives Are Restless”. Released on March 12, 2021, “The Natives Are Restless” has quickly created a rock n’ roll frenzy for fans. So much so that their back-to-back record release parties sold out with subsequent shows mirroring the opening nights, and their road schedule is being added to daily with the buzz continuing to gain strength. With no signs of slowing down, Native Sons has already solidified themselves as a force in their own hometown of Louisville, KY.

Vihimsa- formed from the ashes of a previous Louisville death metal band, Vihimsa is currently a studio project bringing you groovy, down tuned metal with influences ranging from djent to death metal and hardcore. Debut EP coming soon. 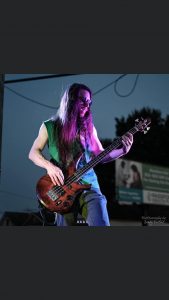 “I’m extremely stoked about my DNA-800 Amplifier. It’s incredibly light weight and packs a punch. As someone who plays multiple genres of music, when it comes to the versatility of its tone, the DNA-800 is exactly what I’ve been looking for!”