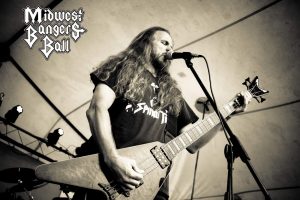 Terry began his musical journey at the tender age of nine years old. His first live show came at the age 14, when he performed for a festival crowd of more than 5,000. After that, he knew exactly what he wanted to do with his life.

While his main focus is Metal, he has played everything from Gospel, to Country, to Prog Metal. His love of heavy melodic music earned him the bass slot in Eternity X when it reformed several years ago. His time with the veteran band led him to Born of Silence which played countless shows across the USA.

After Born of Silence parted ways, due to schedules and interests of other members, he decided to put together a ferocious band that would combine the best of brutal riffs with melodic elements that seem to be scarce in today’s Metal scene. Not only taking the bass duties, he found he had a long dormant, 4 octave vocal range that completed the lineup of War Hammer.

After forgoing the label offers, the band decided to release their self-titled debut EP on their own, which turned out to be a massive success. Within 6 months, the album had been bought and downloaded over 10,000 times, landing them not only larger venues but spots on renown music festivals.

Being a longtime player of David’s gear, Terry has said the following to countless bassists wanting to know how he gets his tone… “Why settle for a really good tone when you can have the best? My tone? Is most definitely in my DNA”!