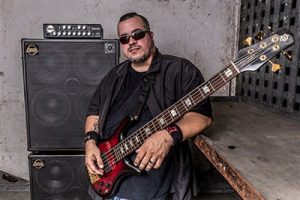 Shane DuBose is currently the bassist for international recording artists Masqued and local tribute Judgement Day and has shared the stage with such legends as Tesla, Ronnie James Dio and Yngwie Malmsteen. Shane has been around the metal scene since the early 90’s as the bottom end for recording artist ZLotZ, which produced three albums, as well as an original member of the band Mindcrime. As the new millennium dawned, Shane would go on to play with such world renowned musicians as Rusty Cooley in the band Outworld, Lance King in the band Krucible and Joel Gregoire in the band Stride. He has also played such festivals as Rocklahoma and continues to be a mainstay contributor at the annual ProgPowerUSA festival.

Masqued are currently putting the finishing touches on their debut album ‘A Light in the Dark’ for Sleazy Rider Records along with their debut video for the title track, both of which are expected to be released in early September 2017.

“This rig is absolutely amazing!!!! I never thought I would be able to get the tone I wanted again without my Sansamp, but that thing is just a stompbox now!!!!! I’ve played my first gig with the DNA-1350 and pair of DNS410 cabs, and have several shows coming up, so now that I’ve had time to tweak it to my tastes, there is no going back!!!! It does everything! The sound and tone is HUGE, and the sustain is incredible. With the built-in tweeter control (on the front of the cabs), you can go from Steve Harris to Geezer tones in a split second not to mention the quality of the compressor. Simply the best rig I’ve had the pleasure of playing through and I’m truly honored to be a part of the DNA team!!!!!”

Mindcrime (a tribute to Queensryche) –
https://www.facebook.com/MINDCRIME-a-tribute-to-Queensryche-171030128017/