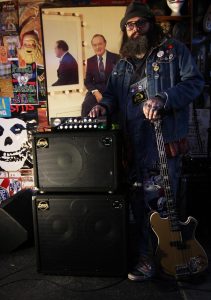 The Little Apple’s hardest working band has been bringing its fuzzy, powerful, hook-driven sound to bars, barns and basements across the Midwest from Austin to Minneapolis (MN, not KS) to Garden City since 2014. Formed from the ashes of Manhattan, KS punk rock act, The Mathematics, Headlight Rivals guitarist/lead vocalist, Eric Kleiner, his cousin and drummer/backing vocalist, Kris Kleiner, and bassist/vocalist, Seven Black, bring together power pop, rock and roll, and country to create a sound that’s been described as “Big Star meets The Ramones meets Waylon Jennings”.

For the past three years, the band has performed at the annual Midcoast Takeover at SXSW, and in 2014 opened for Victory Fest held at Fort Riley. Over the years they’ve shared the stage with names such as Lou Barlow (Dinosaur Jr/Sebadoh), Jim Greer (Guided by Voices/DTCV), and Downtown Boys. When they’re not burning up highway, they’re hosting regional and national acts at their own basement venue, Church of Swole, and throwing the best damn rock and roll party on the Great Plains. These guys don’t just talk the do-it-yourself/do-it-together talk, they walk the walk.

Headlight Rivals released their first EP, Juliette in 2017, followed by Rickshaw in early 2019. For their first full-length record, the band traveled to Sparta Sound and Recording in Eveleth, MN to work with the legendary Rich Mattson. Snowed in for nearly two weeks during the brutal winter of 2019, the band hunkered down and hammered out their best work to date, Mattson, twelve tracks of catchy, unadulterated Midwestern Rock and Roll that is due out in November 2019 on Black Site. Look for them on the road this Winter as they hit every town, village or burg where they can find a place to set up a drum kit and plug in an amp. 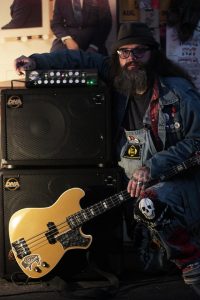 “I have used almost every type of bass amp made, tried and tested on the road. In the ever lasting search for headroom, DNA definitely fits the bill! Light, compact easy on effect pedals. Built in compression that gives you unlimited amounts of definition! Never thought I’d love a solid state. This is the real deal! 1350 paired with the DNS210 and DNS112 is unbelievable! So loud, so defined, and oozing tone! I also love pairing it with my Ampeg 4ohm 8×10. David Nordschow is a genius! You need this amp”!