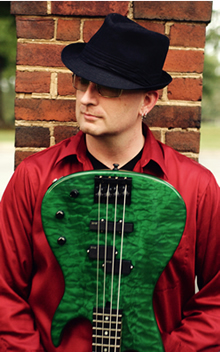 With more than twenty years of experience in virtually every musical genre, Sean O’Bryan Smith is one of the most celebrated and highly sought-after bass players in the music industry. Sean’s virtuoso bass technique and high-energy stage presence, combined with his ability to adapt to all types of music, has landed Sean in an amazing variety of musical situations.

Born in Chattanooga, TN, Sean started playing professionally at the young age of 15. He credits his mother, blues and jazz singer Bebe Hannon, as his biggest musical influence. Growing up in a musical household played an important role in Sean’s musical advancement, as he was introduced to everything from Ray Charles to Beethoven.

Sean moved to Seattle in 1990 to pursue a professional music career on the West Coast. While working with players of the bustling “Seattle” sound, he still had an opportunity to get involved in the local blues and jazz scenes. Sean also spent a large part of his time as a teacher and doing commercial session work.

Returning to Tennessee a few years later, jumped right back into the Southeast music scene. He formed his first original project, the jazz fusion group Ivory Punch, with whom he toured extensively. Sean also found himself in high demand as a sideman and session bassist with various local and national acts. This demand drew Sean to Nashville in 1999.

Upon his arrival in Nashville, Sean established himself as a session bassist working to develop aspiring artists. He has recorded and performed with many local favorites and in 2001, Sean began working in conjunction with Curb Records as a touring bassist with country artist Rodney Atkins and jazz vocalist Anna Wilson. Since then, Sean has performed with a list of Major and Independent label recording artists as diverse as his musical tastes including country music legend Billy Ray Cyrus, pop singer/songwriter Nissi, contemporary Christian superstar Rebecca St. James, and country music chart toppers Cyndi Thomson, Jimmy Wayne, Buddy Jewell, and Robin English, as well as opening up for a large list of major label artists all over the United States.

2009 saw Sean’s star continue to rise as he performed with two other bass stars – Brian Bromberg and Esperanza Spalding – at the prestigious Park City Jazz Festival.
Another aspect of Sean’s career is his work as a writer for some of the top magazines in the industry, including Bass Player, Vintage Guitar, Premier Guitar, Christian Musician and Worship Musician. In fact, Sean got into writing thanks to our VP, Sales & Relationships, Lane Baldwin. “Lane was the one who saw something worth pursuing,” Sean says, “and pushed me to do it. Obviously, I’m really glad he did that!”

Sean has been a member of the family for over a decade, and certainly appreciates the strong relationships he has with David, Lane and many of our other endorsers, but that’s not the main reason he’s here. “Yes, relationships are very important, but the very first consideration is tone. My schedule includes everything from Country to my own solo career as a Jazz artist, and David has always been at the heart of everything I need from a bass amp. I’m very proud and excited to be one of the first endorsers of his new company.”