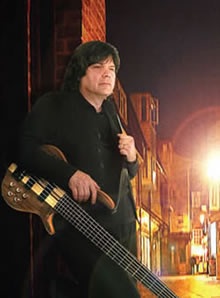 How many people can lay claim to a career so varied that it includes appearances on MTV’s Headbangers Ball, Montreaux Jazz Festival, Montreal Jazz Festival, the London Palladium, the Grand Ole Opry and the Kremlin? From Punk to Funk, the simplicity of Country and Blues to the complexity of HyperJazz and World Beat? Not many; you could count them on one hand and have four fingers left over. Yet master bassist and educator Roy Vogt has done all that and more.

Bryan Beller, writing for Bass Player Magazine, says Urban Legend – Roy’s latest CD, released in July, 2009 – “skillfully combines elements of jazz, fusion and R&B with a foundational maturity and killer groove that teaches listeners a bass lesson on the strength of the music alone.” Writer and music critic Sean O’Bryan Smith says “Urban Legend has so much groove it should be illegal, or at least fattening.”

The first person to receive a Masters degree in Electric Bass Performance (from the University of Miami’s prestigious music school), Roy has been pursuing the art of Bass for more than forty years. In addition, he is recognized as one of the finest educators in the world, mentoring dozens of successful professionals, including the legendary Willie Weeks. Electric, fretless, upright, you name it: If it plays low notes and has strings, Roy is a master at playing it, and in teaching others to do the same. He is also a highly respected and sought after producer, arranger, music director and band leader.

Roy has been teaching at the university level for thirty years. Since 1983, he has held the bass professor chair at prestigious Belmont University (Nashville, TN), one of the very few schools to offer a commercial music degree program designed to turn students into professional musicians working at the top of the industry. Roy’s students have toured and recorded with such notable stars as Trisha Yearwood, Faith Hill, Little Texas, Michael W. Smith, Lady Antebellum, Chick Corea, Sir Tom Jones, Blood Sweat and Tears, Yanni, and countless other music icons.

Roy’s latest venture is the revolutionary instructional course, Teach Me Bass Guitar. Standing head and shoulders above all other instructional programs, TMBG takes music education to an entirely new level that will change how music is taught in the 21st century.

We are very proud that Roy will be the Senior Ambassador for our Music Education program. In addition, Belmont University will be our Charter School.

Roy has been endorsing David’s designs for more than fifteen years. His reason for doing so is simple: “David gives me everything I demand from a bass amplifier,” Roy says. “And Lane gives me service to match. I’m still a proud endorser!”