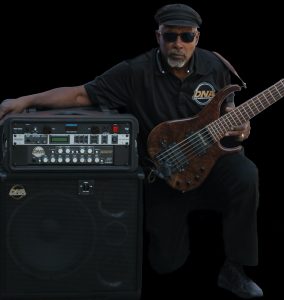 Long-time Eden Electronics endorser Ron Buckner (B-6) when asked why he is switching to DNA he says, “I have played thru a lot of bass equipment and in my opinion the DNA-1350, besides looking great in my rack, is a very versatile and powerful amplifier. I play a six string bass and the 1350 allows me to dial in the sound that I hear and feel, from everything set flat to seriously EQ-ed, and anything in-between. I enjoy thump’n and popping along with low end grooves, you must realize it takes a very solid power supply design and amplification section to re-produce a clear low “B” and a clean “C”. The quality of sound is evident when you hear the notes thru my DNS115 and DNS210 cabinets. To sum it up… Versatility… Power… and Reliability!”

Recently, Ron shared his Buckner Funken Jazz band is one of Denver Colorado’s hottest Funk acts. The band played a series of festivals date including the People’s Fair, the South Park Music Tour, and also performed with the Neville Brothers at the Saturday Night Live Black Tie Gala Benefiting the Denver Center for Performing Arts. The band also recently played for Denver’s Supreme Court! and, the band will soon perform at Denver’s Oktoberfest. Through it all, B6’s DNA rig keeps him grooving.

“Man, you know me”, he said “I’m your biggest fan. As long as I’ve got my DNA Bass Guitar System, I know it’s going to be a good show!”

Ron’s unique style of playing combines the solid back beat of graceful thumping with a straight-ahead peaceful in the pocket groove. His influences came from his high school friends Larry Dunn of Earth Wind & Fire, and Ted “Funken” Duncan from Denver, Larry Graham of Sly and the Family Stone, Graham Central Station, and most recently Victor Wooten of Bella Fleck and The Flecktones. 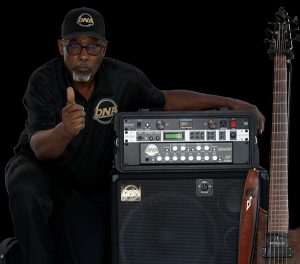 Ron’s also played with Sky, Specter, The Regroovanators, Splash, Impulse, The Jazz Project, Ace Butler And The Aces, The New “G”, Sammy and Friends, Silver Jeff, Carl Dixon, Linda Theus-Lee, and host of other bands in California and in Colorado.

He recently recorded with Portrait, on their “Without A Second Thought” CD, Katie on her Angel Eyes CD, Park Peters on his “Because You Asked” CD, and was requested to record the bass tracks for the “Oasis Product Line” commercials. “Down The Drain” By Regan Mizuno recorded at Raging Waters Records, and “The Ugly In Me” for the group Sans Visaj on their latest CD “Pearl” also at Raging Waters Records.

He is currently playing in the Buckner Funken Jazz Band with his brother, Rod Buckner, on trumpet. Ron also collaborates with various Denver-area artists and groups laying down studio grooves for them. Ron is the owner of Brainstorm Recording Studios, Brainstorm Records, and BRI Digital Images, subsidiaries of Buckner Resources Inc. He produced, engineered, mixed, and mastered the CD project for the band A New Elysium, Ticket To Nowhere. Produced and mixed “Russell Edwards’ CD, Edge Of A Fall”, Produced mixed, and mastered the CD project for GateKeeprz self-titled CD GateKeeprz. Produced, mixed, and mastered Buckner Funken Jazz’s newest CD “Get Your Groove On” and he’s working on his solo CD entitled ”Direct Current”. 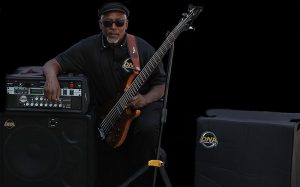