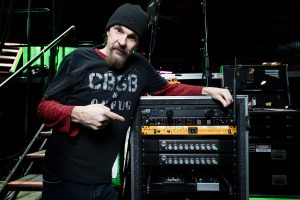 Robbie is one of the founding members of Godsmack. He and Sully Erna met through Sully’s sister, and the two became roommates and friends. In February 1995, Erna decided to start a new band as the lead singer after playing the drums for more than 20 years. His new band, The Scam, formed with Robbie on bass, local guitarist and friend Lee Richards on guitar, and Tommy Stewart on drums. Not long after they recorded their first demo the band’s name was changed to Godsmack. Robbie is also a founding member of the band Another Animal along with Shannon Larkin and Tony Rombola. 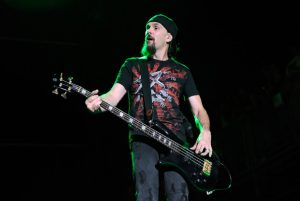 Although he plays left handed, Merrill writes right handed due to a birth defect that renders him unable to move the middle finger of his left hand. He crafts a sound as soulful as it is cutting—gravelly, but with a clear high-end sheen. Some of that clarity comes from a relatively new technique at the fore of his tone equation: fingerpicking. Robbie tried playing with fingerpicks and has decided to use them exclusively, using Dunlop Clear “D” plastic fingerpicks on his plucking hand index and ring fingers. “At first I hated the feel, but once you get over the hump of not feeling the string beneath your finger, you eventually don’t even realize they’re on and you come to feel the strings again,” he says. For Merrill, fingerpicks provide the best of both worlds. “When you play with your fingers, it’s harder to get the consistent sound from a pick hitting the string. With fingerpicks, I can get that sound but still keep that finger style”.

“After playing SWR and David Eden amps years ago it felt natural to switch over to DNA and I’m really glad I did! I currently use the DNA-800 amp and I’m impressed with the tone and its many features. I use the amp direct and the pre amp has a very warm and round low end with punchy high mids. The amp has many great features like shape control and a studio quality compressor that help me get my aggressive monster tone!”