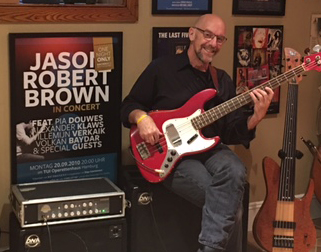 As a longtime member of Jason Robert Brown’s band, The Caucasian Rhythm Kings, his work includes the original cast recordings of Songs for a New World, The Last Five Years, as well as Wearing Someone Else’s Clothes and Lauren Kennedy’s Songs of Jason Robert Brown. Other recordings include Georgia Stitt’s This Ordinary Thursday, Loudon Wainwright III’s Grown Man, Tom Kitt & Brian Yorkie’s Next to Normal, and several albums with New York Voices.

Randy uses our DNA-1350 amplifier to power the DNS-112 and DNS-210 cabinets. He says, “both are perfection, but the 12 with the 1350 is mind blowing! How something that size can sound so deep and rich… really impressive! Great work, guys!!”