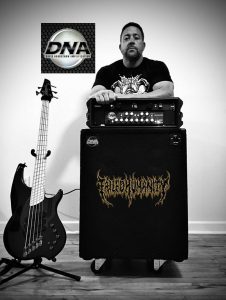 Phillip Wallwork was born and raised in eastern North Carolina. He got his first bass guitar at age 14. He played in different bands throughout his teenage years alongside three good friends… Jamie Hardy, Richard Bruce and Greg Mckenzie. They were all influenced by different types of heavy music, mostly heavy metal and thrash… but found their calling in Death Metal jamming in the early-to-mid 90’swhen Death metal/Extreme metal first started to hit the underground music scene and take off.

As the years passed Phillip and his bandmates went their separate ways as life would have it with work and starting families yet they continued to keep in touch while doing their own thing musically. Phillip moved to Wilmington NC and formed several bands over the years including Buzzard Circle, The Art of Murder, Despoilment and Dear Mother War. He still currently handles vocal duties for Dear Mother War alongside guitarist Rob Callahan and drummer Sean Pasc. Fate eventually brought the original members back together. Phillip, Jamie, Richard and Greg started Blood Force which hit the NC metal scene full force. As their music changed and evolved over time they changed their name to FAILED HUMANITY. Phillip plays bass and shares vocal duties with Jamie.

“This band is really special to me,” says Wallwork. “It’s like going home, and coming back to your roots in a way. It’s pretty awesome to be jamming again with the original group of friends I started with as a kid. One of the greatest things I love about this band is that no two songs sound alike. Every song is different and that’s something rare in today’s metal scene. As I’ve grown as a bass player, I’ve experimented with many different amps searching for a killer tone. Some were better than others… I’ve just about tried them all”.

“About a year ago I went into my local music store Bass Pluckers, which is dedicated strictly to selling bass guitars and equipment. I met the owner of the shop, Greg Taylor, who is an awesome guy and a hell of a bass player. Greg introduced me to DNA Amplification, which he plays himself, and is an official DNA dealer. The first note I heard come out of this amp I was completely floored! That same day I listed my current rig for sale and bought a DNA-1350. It has truly taken my tone to the next level and since that day I have never looked back. It has given me the tone that I have searched for years to find. I’m a fan of Darkglass electronics pedals and the supreme articulate clean tone I get from my DNA head takes those pedals to the next level and combined gives me the most brutally awesome tone I’ve ever experienced!” 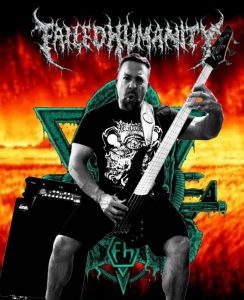 “I replaced my 810 with a DNS410 cab and again was completely blown away with the power and clarity that it produces! It smoked my 810 out of the water! It’s louder and crisper and brings life to each note I play. I’ll never own another brand, DNA is the best hands down and I dare anyone and everyone to play through one just once and see for themselves… they’ll be hooked!