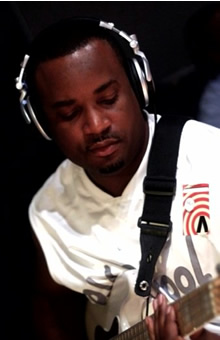 Maurice Fitzgerald began playing bass on a professional level at the age of 18 and has maintained a diverse professional career for 18 years, playing with contemporary jazz greats such as Ramsey Lewis and Brian Culbertson, as well as gospel greats such as Donnie McClurkin and CeCe Winans.

Maurice offers Marcus Miller, Anthony Jackson, Nathan East and Jaco as his main influences, along with Gospel greats Joel Smith, Steve Huff and Andrew Bushe. His crisp, distinctive style, combined with a strong work ethic and easy personality, have made him a much sought after sideman both in the studio and on tour.

Maurice has worked with dozens of top artists and continues to be in high demand. He has recently recorded with The Clark Sisters, Marcus Cole, Smokie Norful, Brian Culbertson, and Israel and New Breed.

A long-term fan of David and his designs, when Maurice heard about David’s new company, he jumped on the phone to lend his support. “I’ve always been a fan of David’s designs,” said the bass icon. “I’m thrilled to be a part of the family again.”