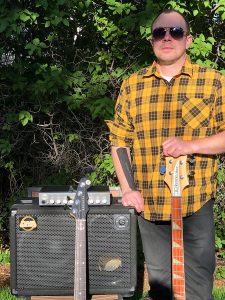 Matt’s first instrument was actually the violin when he joined the school orchestra in 5th grade. Then a relocation from Arizona to Montana and by the 7th grade made the switch to upright bass. This was the early nineties and Matt quickly discovered grunge, which was an outcast thing to be a part of in small town Montana! Around that time a friend bought an electric bass, and was quickly drawn to it.

The first Weezer album had come out, and then Matt discovered Primus. He started buying a ton of music, mostly rock, metal and grunge then moved to Missoula, MT where he developed an appreciation for the local music scene and played in various short-lived bands. Matt’s first “real band” was called The Premies, and recorded an album called Barbed Wire World.

“It’s really great having a rig that takes only seconds to dial in an amazing tone! I set everything at noon, and with a few minor tweaks, I’m ready to go. It sounds great at all volumes, there’s no sacrifice in tone even at low volume. I’m stoked to be a part of the DNA family!”