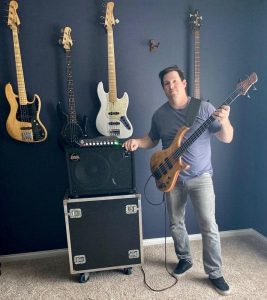 Matt Ables is a bass guitar player from the Northwest Indiana/Chicago area. Matt started playing in his early 20’s with shows and releasing music shortly thereafter. Matt’s inspiration was his younger brother, a multi-instrumentalist, who played drums in several bands. Matt’s career as a musician has taken him to performing in rock bands – original, cover, and tribute. Most notably playing a west coast tour in the early 2000’s with Madhops.

Matt’s sound is a mix of R&B, Progressive Rock, and Metal. He also enjoys the smooth tones of R&B but also the punch and attack of Progressive Rock. His influences include James Jamerson, John Entwistle, Steve Harris, Marcus Miller, and Ryan Martinie. Matt has released music with Madhops (New Brand of Hurt), Ideogram (Sorry for Something) and Komplicator – EP, and has played shows at the Whisky a Go Go (Madhops), Metro Chicago (Madhops/Chevelle), The Colosseum (Ideogram/Drowning Pool), and Reggie’s Rock House (Komplicator). Matt’s currently making new music and collaborating with several musicians.

“My DNA-800 produces punch, tone, and clarity! I can dial in any tone from RnB to heavy metal and the studio-quality compressor is simply amazing! My DNS112 offers amazing punch and clarity as well. Amazing low end that allows me to play in standard and drop tunings. Working with DNA has been a great experience, their team is welcoming and helpful with any issues and I couldn’t be more proud to represent this company”!!!!