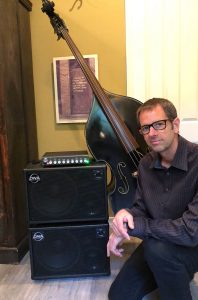 Mark got his first guitar at age 12 after winning a contest at the Boys Club of Santa Monica. A Los Angeles native who grew up influenced by the late ’70s and ’80s LA punk and rock bands, he has been playing guitar and bass with a variety of bands whose genres include rock, punk, funk, blues and rockabilly.

In addition to playing with a variety of local bands and artists, Mark’s currently working with the alternative rock band Hotel 66 and Barry Boyce whose vocal style lends heavy to those early Manchester bands such as the Joy Division, the Stone Roses, the Happy Mondays, and Morrissey. They are busy writing and recording with plans on releasing a new EP and tour dates soon.

“I’ve been a longtime fan of David’s work, and was excited when I read an article in noTreble back in 2010 that he was coming out with DNA Amplification. The following year I got my first DNA 410 cab and it’s been love ever since. I’m currently playing a DNA-800 paired with two DNS-112NPs and the tonal options and punch of this setup are just mind blowing. Having the ability to own one rig that can handle a variety of gigs and allow me to switch between upright and electric with a minimum amount of fine tuning has been truly wonderful. From Rock to Rockabilly, my DNA handles it all!!”