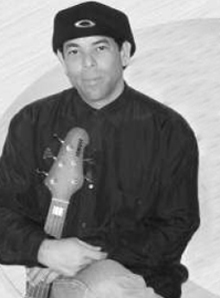 Mahlon has been playing bass for more than 35 years and has performed and recorded with some of the best in the business.  He started his career as a musician in his birthplace, the Republic of Panama, as a teen where he worked with high profile local bands, cutting his teeth in recording studios, and performing in music videos for primetime TV.

He relocated to Los Angeles, where he continued his work as a bass player, recording music for movies, appearing with popular Los Angeles based bands, opening for national acts, recording on many artists albums and becoming a regular performer on the Southern California club circuit.  After a few years of wood-shedding in Arizona, Hawk relocated to Denver in late 2010.

Mahlon spent 6 years in manufacturing sales, servicing Pro Audio customers for QSC and as a direct sales rep for US Music Corp.

In 2010, Mahlon was invited to perform at LOW NOTES FOR NASHVILLE, a charity concert benefiting the many musicians who lost everything due to the Spring 2010 flood in the Nashville area. Hosted by Lane Baldwin and Sean Smith, the Low Notes for Nashville concert featured the performances of nationally known bass players: VICTOR WOOTEN, STEVE BAILEY, VAIL JOHNSON, ADAM NITTI, DAVE POMEROY, BRYAN BELLER, JONAS HELLBORG, DOUG JOHNS, ROY VOGT, and STEVE LAWSON.  Mahlon’s unique performance of  his new arrangement of Blackbird and his Latin Jazz spin on “Paco & Dave” brought a whole new twist to the event.