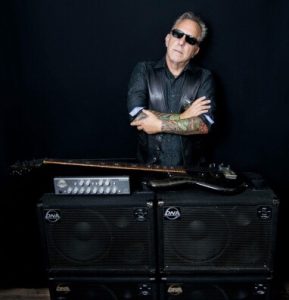 In the beginning of 2012, bassist, singer and songwriter Lane Baldwin had a simple plan: invest everything he had to work with producer/manager Polo Jones on a major-label quality follow-up to his critically acclaimed 2008 release Dig the Hole. Then take over the world – or at least tour it.

As the end of 2013 approached, everything was on track. The View From Here was released to numerous positive reviews, and was chosen Thunder Row’s Album of the Year; Lane was preparing to be the first bassist in the International Blues Competition’s 40-year history to compete as a solo performer, and doing it on his Spector 6-string electric bass. To say he was the talk of the town is a huge understatement. The extensive media attention he was receiving would lead up to a three-week media tour before Lane hit the road with a new band.

Sadly, none of it came to pass. Instead, Lane died. Three times. “And then the fun began,” said No One Ever.

Lane flat-lined three times as doctors raced him into surgery for an operation he was not expected to survive. Thanks to “two years of doctors, surgeries and hospitals,” as Lane puts it, and “another two recovering from the physical, mental, and financial devastation that followed,” it wasn’t until the beginning of this year that Lane was able to begin putting his life and career back together. Lane refused to give up. Now, he is again planning to take over the world. As he has proved these last four years, he has the determination and focus to succeed. 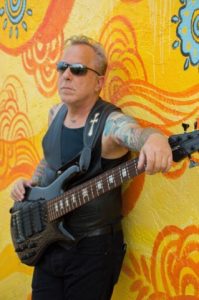 While Dig the Hole focused on Blues and Blues Rock, the styles on which Lane built his reputation as a rock-solid bassist, The View From Here offers a much broader perspective of Lane’s writing. In addition to several great Blues tracks, the album includes some serious rockers and the lullaby he’s wanted to write since childhood, which many have called the most beautiful song they’ve ever heard. “I was five years old when I heard Brahms’ Lullaby,” Lane said, “ and decided to become a musician, composer, and singer. It’s all I ever wanted to do.”

“Most of the songs I write have their foundation in the Blues,” Lane said, “but I love to blend in other styles, depending on the song. On The View From Here you’ll hear elements of many styles of Rock, R&B, Soul, Funk, Metal, Jazz, a bit of classical, even a little Redneck to acknowledge my Texas roots. The result is that my signature sound is that I have no signature sound, except that the bass is always rock solid and serves the song and the groove. And that’s where DNA comes in, delivering the tone I need and demand.”

For more than two decades, Lane has been one of David Nordschow’s most passionate and vocal supporters. On top of his own music career, for several years he served as David’s right-hand man, and was a partner in the startup of DNA. “I love David’s designs so much that I did everything I could to help promote them, including help start DNA” the veteran bassist said. “I’m proud to endorse his designs, and to use them exclusively. To me, there is no better amp on the market.”

As he prepares to tour, Lane is using our DNS-112N cabinets (he now has four, with plans to build a wall of twelve or more) and DNA-1350 amplifiers. “I was part of the design team and helped make sure the 1350 was the most versatile amplifier possible. The tone section is extremely expressive, and the studio-quality compressor is the best I’ve ever used. The patching possibilities are seemingly endless, and the DI is still the best in the field. I can’t ask for anything more in a bass amp. I just want more of them!” 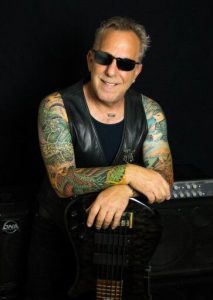 “I love the entire line of speaker cabinets; they’re all amazing!” said Lane. “My personal favorite, the DNS-112N, is exactly what I need: killer tone in a small, scalable package. With this rig, I’m enjoying the absolute best tone of my career and I couldn’t be happier.”

As 2018 draws to a close, the future looks bright for the man who epitomizes the Phoenix legend of rising from the ashes of death to soar to new heights. Lane’s first “comeback” single/video, I Won’t Give Up, will be released shortly, and will be followed by a second single leading to a full album. The live band is in preparation for touring much of next year. As always, he remains positive in mindset, committed to his dream, and focused on success. “I survived death,” Lane said, “and I’m on Life 2.0. I learned that I can handle anything life throws at me and come out on top as long as I don’t give up. And you know… right now, the view from here looks pretty damn good!”