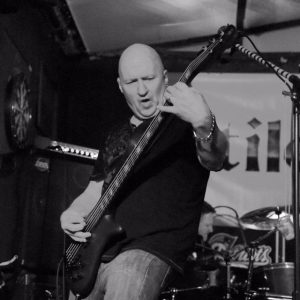 Kaptain “Kirk” Bartholomew developed his obsession with music on the East Coast, primarily in Massachusetts and Florida. The rock bug bit him hard and he focused on his bass guitar for a number of years, leading to a move to the west coast and a reputable showing on the southern California rock and metal scenes.

A series of high profile gigs with the band Witnesses culminated in playing the Rose Bowl by invitation in front of a crowd of 30,000 people. In the role of bandleader, Kirk gave his other most famous band, Amasa (pronounced “a-ma-say”), his Native American middle name. This band took a more exploratory approach to rock, and at one point included a couple of appearances in the recording studio by Marc Soucy on keyboards, and old friend from back east.

Kap has recently completed producing and recording a solo disc. Along with the help of some talented friends the music stands to be something new and exciting. Along with the solo project, his band Stilletto, and a new project in the works will keep this rocker busy. Next up…a new Holiday disc for release next year!

About Kap’s new DNA Gear… “JV, got the head yesterday and gave it a test run last night. OMFG!!! Un-freakin real. The 2×10 cab with DNA 800 blew everyone away, absolutely floored our sound man. Handled the low B-string nicely. My 5 string Spector didn’t miss a beat with the DNA. Thx for bringing me back into the fold”!! — Kap.