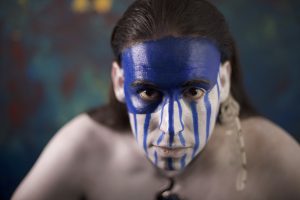 Picture an owl prowling the night skies in search of sustenance. First floating on the up currents with wings stretched to catch every errant breeze, its eyes constantly searching the ground for its prize. Then diving in a flurry of speed and feathers to capture its intended prey. And all the while reveling in its harmony with the rest of creation. Consider this analogy as you contemplate Juan Garcia-Herreros and his meteoric rise to stardom.
Juan García-Herreros is best known as The Snow Owl, and his quest is not for food alone. Instead, his is the search for the perfect groove, the perfect melody, the perfect harmony and spirituality that infuses music at its best. Juan is a GRAMMY nominated, Colombian born, world-renowned electric bassist. With his special instrument, a six-string Contrabass Guitar, he has performed with world famous stars of all genres – including several Grammy / Oscar award winners and nominees. He has been honored for his own music, with numerous prestigious awards, including the Global Music Awards’ Bronze Medal for Instrumental Music. His work and virtuosity with the Contrabass Guitar has earned the highest recognition from international Bass and Music publications.

The Snow Owl was born in Bogota, Columbia. It wasn’t until he moved to New York that he took up flute at age nine. After middle school the family again relocated, this time to Dunedin, FL, where he discovered the electric bass. Unable to afford private lessons, he taught himself. He was so passionate in his pursuit that, at the tender age of 16, he began to teach Music Theory and Jazz performance at Dunedin High School.

Recognizing his talent and dedication, Juan”s band director encouraged him to study acoustic bass so he could also perform with the school”s symphonic band. Juan became proficient so quickly that he began performing with the Tampa Bay Symphony at age 17.

Later The Snow Owl earned a coveted scholarship to the prestigious Berklee College of Music (Boston, MA), where he studied with world-renowned instructors Bruce Gertz, Joe, Santerre, Rich Appleman, and Oscar Stagnaro. At 21, Juan returned to New York to pursue his career. He quickly established himself as a true artist, able to meet the demands of everything from Jazz, Latin and Pop, to Funk, Rock of all eras, Heavy Metal, even Avante Garde, without compromising the integrity of his own unique sound.

Since 2004 Juan has resided in Vienna, Austria, where he began his career as a soloist and bandleader. In the decade since, he has been honored with a Latin GRAMMY nomination in the category of “Best Latin Jazz Album”. This prestigious honor has never been achieved by an Electric Bass Player or Colombian World Jazz Musician. In March 2016 he brought Austria and Colombia the first Global Music Award (Bronze Medal) for “Instrumental Music”. Besides his performing career Juan has been teaching masterclasses at the most prestigious schools and festivals all around the globe.

Thanks to his deep passion and commitment, Juan has reached incredible heights in a very short time. His latest CD, The Blue Road, promises to propel this amazing artist to even greater altitudes as he continues his pursuit of musical perfection. Like his name sake, The Snow Owl relentlessly pursues his passion with grace, beauty, and harmony.

The Snow Owl has relied on David’s designs for over a decade. Whether he”s playing Jazz or Metal, or anything in between, Juan relies on David to bring his music to the world. “David has always been at the heart of my sound,” Juan says, :”and he always will be. And it goes even further, because David and Lane are family.”