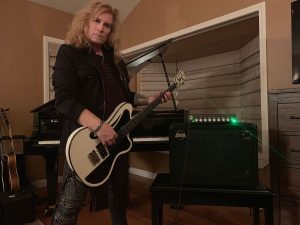 Born in New York, John Bisaha is a pure vocalist who has worked within various forms of the industry for years. John has been honing his chops from a very early age, from fronting bands to television sitcoms, from character voice overs to equity-staged rock operas (Jesus Christ Superstar, Godspeed and Destiny Faire).

BISAHA has performed around the world with various groups, traveling throughout The Far East, Europe, and across the US. John has had the good fortune of working alongside, and opening up for such artists as Roger Hodgson (Supertramp), Ricky Phillips (THE BABYS, Bad English, Styx), Dave Amato (REO Speedwagon), Blonde, DEVO, Tom Morello, Barenaked Ladies, John Densmore, Ozomatli, Heart, Cheap Trick, Robin Trower, Blue Oyster Cult, Jason Bonham, Trevor Rabin and several other notable acts.

THE BABYS were THE BAND for John coming up. Seems things may be coming full circle for several members.

John was interviewed by Chris Akin on Inside the CMS Studio on August, 8, 2016, where he was asked to tell a story before choosing a song to close the segment out. This was John’s story:

“I was in my car and I was just having a quiet moment with myself, and you know sometimes when you get into that [you know] meditative state, you could be in a spiritual state, whatever… I was in that moment and I just had this real warmth kind of come over me, and I was feeling that, ‘You know, everything’s going to be cool.’ [And you know] for most of my life, I mean I’ve gotten fairly close to a couple of independant record deals back in the day. I had some decent success doing Jesus Christ in Jesus Christ Superstar all over the country and doing some things like that, but at the end of the day I really, really wanted to front a rock band that really had a catalog of hits, and THE BABYS was perfect for me. I really wanted it. So, I’m sittin’ down, very quiet. I feel a warmth come over me and I’m listening to this whole catalog- getting my fingers underneath the music ’cause if I’m going to be playing bass I need to know where everything is. And all of a sudden ‘Gonna Be Somebody’ comes on, and I really start feeling it, and then I get a phone call, and the phone call is ‘You’re the new singer of THE BABYS'”.

On his DNA gear:
“I am extremely happy with my new DNA 800! I had wrestled a long time with trying out a new brand – since I was happy with my old setup. The first thing I noticed out of the box was that the head and cabinet were light weight. No more back pain lugging my gear! The next (and BEST) thing I noticed – once I plugged in and began to play – was that the tone had a beautifully rounded bottom end! And it wasn’t a ‘muddy’ bottom end – just nice and round – with definition! An extremely flexible amp – I’m able to go classic rock to current – with just a few tweaks. Thanks so much John Vitale and DNA Amps – you’ve made another bass player very happy!”