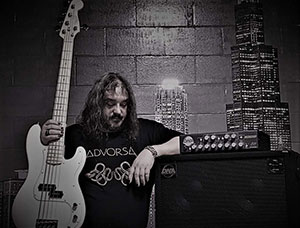 If you live in the Midwest and are a fan of going to see live Rock/Metal bands, you’ve probably seen Jim Lenten, or “Grim” as some people call him perform. From cover bands to original projects, pop-rock to death metal, he’s played many venues in northern Illinois and Indiana. Grim was inspired at an early age as his father was a touring musician. Early piano and drum lessons evolved into teaching himself guitar at 15. At 27, he was asked to fill in on bass for a friend’s band and realized he had found his instrument.

Today Jim makes the rounds in the Chicago metal scene, clubs, underground punk/metal shows with his current band AdvorsA… a metal band made up of musicians from northeastern Illinois. Grim was drawn into the genre by the speed and technicality of the music… and embraced the challenge. AdvorsA has an EP coming out summer of 2017 and working on a full length album scheduled for late-summer 2018 release. Follow/Like the band on Facebook and check out their debut album on BandCamp… links below.

“When I first fired up my new DNA-1350 I spent a little while just letting notes ring out, listening to the over tones and harmonics that my old amp was apparently ignoring. Once I started playing the thing that stood out most was the natural sound of my bass. The lows were powerful without being too boomy and the highs were not shrill but piano like. Partnered with my DNS410 cab I get amazing bass tones that can rattle your fillings. My DNA rig truly sounds twice as big as it is”!