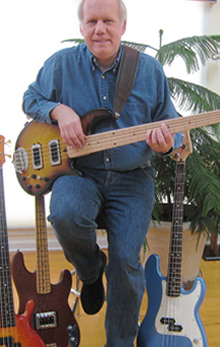 Jeff Carlson’s solid bass playing is a key ingredient that keeps The Crew’s fans on the dance floor all night. He is a life-long disciple of infectious styles of music that audiences love: soul, Motown, Stax, rhythm & blues, classic rock, and contemporary worship. Credits include LP album sessions at Curtis Mayfield’s Curtom Studio, the dance band Final Edition, blues rock originals with Separate Checks, and some of Chicago’s finest songwriters.

Over the years, Jeff has combined a love and curiosity for bass playing, building basses, and modifying gear. At a young age, when his peers were putting forks in toasters, he figured out how to connect his first bass and a phonograph to the family’s spare TV set – a 1953 RCA Victor console with built-in mono amp and 12″ speaker. While a cool way to “amp up” for learning the music of the 60’s, Jeff knew that a bassist needed something more portable than a 40″x40″ maple cabinet!

After a few years of self-study, Jeff was invited to join the coolest band in his hometown, which required cramming to learn the entire Allman Brothers catalog up to 1973, along with numerous other blues/rock tunes. Live performances were primarily outdoors, where more power would have been welcome.

One memorable experience in the ’70s was writing original bass lines for a singer-songwriter’s album of 14 originals. In two weeks, the parts were written and the group rehearsed, except for a session drummer who laid it down “live”. The two-night session at Curtis Mayfield’s Chicago studio was recorded live to two-inch tape – a very exciting first recording gig. That session taught Jeff how hearing one’s bass clearly helps control the groove and make a focused statement.

Through the 1980s and 1990s, Jeff was a weekend warrior throughout the Chicagoland area with dance and rock bands, as well as supporting the originals of accomplished singer songwriters. He now focuses his time on The Crew and performing with a pair of praise bands in the Chicago area.

For the last five years, Jeff has pursued the craft of building and modifying basses to suit projects of the moment. Some of the builds are “go-to axes”, while some were sold to bassists in Chicago, Nashville, and Dublin. Receiving fan mail photos from buyers has been a real honor.

During this period, Jeff also became an avid fan of David Nordschow’s talent for building the best bass amps and cabinets. Jeff Carlson has been working David and Lane for more than five years, assisting with testing in various areas, including product design and Quality Control. When the company assembled its SEAL Team, Jeff was an obvious choice.

“I really love David’s designs,” Jeff says, “and I love doing testing and development. It’s a real honor to be a Local Liaison and SEAL Team member. I’m looking forward to a lot of fun!”