Ian Smith, hailing from Manchester, NH began playing bass as a teenager. Through his middle and high school years he was in various local punk rock bands, playing in basements, elks lodges, and whenever he could. After a few years hiatus from playing on stage he met The Trichomes at a house show and soon after began playing bass in the band.

The Trichomes are constantly gigging, performing at a plethora of festivals, venues, making loads of public appearances, and host their own annual music festival, all the while recording new music. They bring hi-energy funkadelic performances, infused with infectious grooves, cosmic riffs, mated with insightful lyrics and a dirty back beat that spontaneously combusts into the heels of your shoes.

Recently Ian began a second musical project, Married Iguana. Focusing on blending styles ranging from thrash, to funk, to blues, to electronica, their main goal is to push boundaries and keep the listener on their toes. Ian’s playing style pulls strongly from his love of ska and punk rock. However, no matter the genre he brings the spirit of those styles into his playing creating thunderous riffs with sultry melodic undertones that propel the rhythm section beyond the typical bass role.

“I love my DNS112 cab! The tone is wonderfully articulate and clear without sacrificing even a hint of low end. Being able to hear even the most subtle nuances in my playing has propelled me into being a better player.” 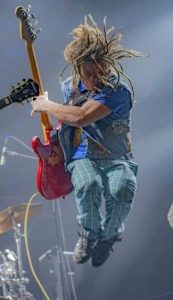