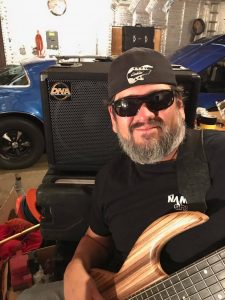 Chicago bassist German Pizano started playing bass guitar in 1982. One of his early
influences was Gene Simmons of KISS. He received his first bass at age 13 and joined
his first band “Stonehenge”. German was influenced by rock music and the technical
aspect of playing. He worked hard to be able to play with the technical prowess of
his bass heroes. It was also this hunger for technique which led him to Jazz music.
Jazz opened up his ears and mind and soul to a new way of feeling music. Jazz
showed him how to feel and project romance, sadness, happiness, anger… through his
playing.

“After playing David’s Eden amps n cabs for years… I was pumped to have the
opportunity to come back to the family as a DNA endorser. My DNS112 cabinets are
amazing. The amount of air they move for such small and lightweight cabinets is
unreal. If you’re looking for the best sounding, best built, light weight tone
monster cabs… look no further than DNA. Stoked for what the future holds. Thanks
DNA!”