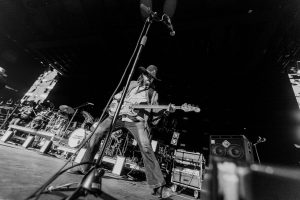 For over 30 years Eric has danced his way across stages known to some as Eric Harley Brown but given his unique on-stage persona- is most accurately referred to as “Crazy Legs.” Starting at just the young age of 16 he traveled throughout the southeast college, festival, and bar circuits.

After graduating high school and moving to Murfreesboro, TN he was a founding member of the widely popular 90’s jam band Janie Grey. Performing with such greats as Col. Bruce Hampton and the Aquarium Rescue Unit, Ace Frehley (from KISS), Merle Saunders, Leo Kottke, Billy Joe Shaver, and Jack Pearson, to name a few.

His talent has seen the inside of studios providing upright and electric bass for Jazz, Bluegrass, Rock, and Country artists. His experience within the industry also expanded to stage-hand work.,, with the likes of The Allman Brothers, Bob Dylan, The Eagles, BB King, Blues Traveler, Pat Metheny, Eric Clapton, Widespread Panic, among others. Eventually finding a rhythm in the world of a theatrical bassist.

Where he provided low notes for 300 Theatrical performances in Off-Broadway shows like Idols of the King (Tribute to Elvis), and My Way (Tribute to Frank Sinatra). “It was one of the great musical educations of my life.” Working in productions that found their way onto some of the most prestigious theaters in the south. Such as the famous Ryman Auditorium in Nashville, TN. Where he’s had the opportunity to play in the “mother church” over a dozen times.

He now professionally tours with one of his best friends and rising country superpower, singer/songwriter and Big Loud recording artist Larry Fleet. Incorporating his love of electric and upright bass. Most recently performing with Larry for his debut, at the Grand Ole Opry to a packed house and standing ovations all the while being filmed, along with Larry and guitarist Zander Wyatt by ABC for the CMA special Backstage Pass.

In the Larry Fleet band and independent ventures, Eric has had the honor of playing and touring with iconic acts Willie Nelson, Allison Krauss, Charlie Daniels and Darrius Rucker. Along with such artists as Morgan Wallen, Ludicris, Sam Hunt, Jake Owen, Jon Pardi, and Brett Eldridge. Also performing in front of tens of thousands of people at some of the biggest festivals in the US. Catch him providing low end support with Larry Fleet, opening for Morgan Wallen on one of the biggest tours of 2022. With stops at Madison Square Garden and arenas throughout the country.

“I am thrilled to now be part of the DNA family. I have been playing exclusively Eden bass rigs for over 25 years and am honored to be associated with David’s products. I received my DNA-800 head the other day, which I added to my touring rig as my main head. It is one of the finest products I’ve ever owned! I found myself utilizing it’s features more than I ever did with my trusty WT-800… which is now my backup. I can’t wait to incorporate more DNA gear into my rigs!”