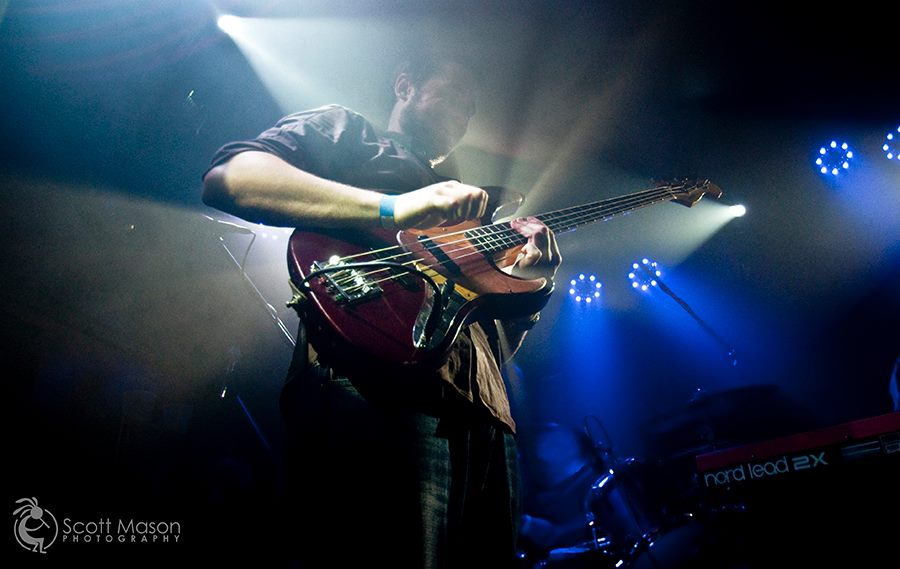 Colin Scott plays in the long standing jazz/funk trio Spare Parts in addition to being a versatile and in demand Chicago bassist. Colin’s wide range of musical influences has led him to employ many different techniques and methods of attack on the bass. From fingerstyle and pick playing to helicopter slap and deep palm-muted thumb grooves, nothing is off limits. Only an amplification system of the highest quality can accommodate. In DNA, Colin has found his match, “These amps and cabs are rock solid. The DNS-410 and 1350 amp is an absolute beast of a rig. Mix and match the other DNA cabs with the 1350 or 800 amps and you have the versatility to cover any gig.” Colin speaks from experience, having worked with David directly on testing and enhancing the 1350 amplifier to handle the demands of any playing style.

Spare Parts has several releases out on Ropeadope Records and has toured extensively throughout the U.S. and beyond while becoming a mainstay on the Chicago scene. Known for their hard hitting grooves and collaborations with Chicago’s finest musicians, Spare Parts has won a loyal following over the years. They have opened shows for artists including Victor Wooten, George Clinton & Parliament Funkadelic, Vulfpeck, George Porter Jr., The Wailers and many more. Colin has been featured on the bass website NoTreble.com several times, including their monthly Top 10 Most Watched Bass Videos. Colin specifically has had the honor of performing with Banyan (Stephen Perkins of Jane’s Addiction), Victor Wooten, Fareed Haque, Bill “the Buddha” Dickens and Lenny Pickett among others.

Check out sparepartsmusic.com for his upcoming gigs, music, videos and more.

“OMG Colin Scott was on and it made this old man come out and work it” -George Porter Jr.

“Bassist Colin Scott takes charge on the next couple of tracks, ‘Trilogy I & II and Part III.’ This is one of those tracks that is fantastic because it’s so familiar, without one being able to pinpoint exactly what it’s reminiscent of. Sure, Kozol’s keyboard lines are vaguely Bernie Worrell-esque (he’s the keyboardist in Parliament), and it’d be easy to compare Scott’s bassline to something by Les Claypool, but that’d be too easy.” – Paul Abella, Chicago Jazz Magazine

“I’m always looking for the new and unique and quite often I look to the Chicago scene where there’s always something interesting to be found. From that fertile ground comes BRIGHT MINOR from one of my favorite Chicago groups these days, SPARE PARTS. These guys squeeze more out of keyboards, bass and drums than any trio you’ll find anywhere!” Russ Davis- Modern Jazz Radio (MOJA)