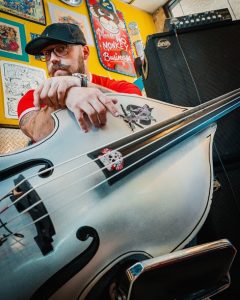 Chris Parrish has an eclectic and varied taste in music and picked up the bass guitar around age 15. Drawing influences from the likes of Pantera, The Stray Cats, The Misfits and even southern rock bands like .38 Special, not too mention country and western acts like Bob Wills or David Allen Coe, Chris started to develop a unique style that lent itself more towards roots music and even punk rock. By the time he was 18, Chris had recorded his first album with the Fort Worth based punk band Eerie Ln. and had already begun to tour regionally, all the while regularly appearing in a Texas blues band at various Fort Worth clubs.

At 20 Chris made the switch from the electric bass to the upright bass (a move inspired by a swing band he had watched with his father some years earlier on PBS) and began to play progressive metal. From there he left the prog scene for an Austin Based cowpunk calling themselves The Hotrod Hillbillies where he was able to hone his unique style melding Texas country with punk rock and a healthy dose of upright bass percussive slap. It was in this outfit Chris recorded his second full length album and toured the US extensively. From there he would move on to form the Dallas rock and roll band Sawed Off Sick (with former members of the Phantom Rockers, Slick 57 and Ghoultown), record two more full length records and tour regionally before they disbanded.

Chris’ current band, From Parts Unknown, is a punky rock and roll band out of Dallas, TX. They are a trio: guitar, drums and the upright bass. FPU have recently signed with Stupid Rad Records and Distro out of Chicago, IL and are set to release their third offering “S8N” Summer 2019 and will be touring the US, Canada and Australia to promote the release.

“I never thought I would ever be able to get my hands on any of David Nordchow’s amps and now here I am… an endorsing artist for DNA Amplification! The DNS410 delivers a punch and clarity I’ve never really experienced; all the little nuances of my bass are totally audible. And the DNS115 rumbles hard! Not too mention the high frequency driver knob is on the front of the cabs and not the back. Brilliant! The DNA-1350 amp offers me a ton of tone shaping, a rad built-in studio quality compressor and plenty of power. I can’t wait to get this setup on the road!”