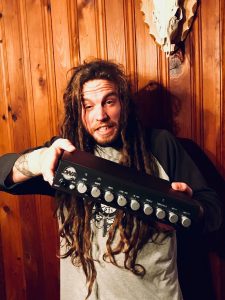 Anthony “Ski” Gadzalski is the bass player for the Richmond, VA-based, death metal touring machine known as DEATHCROWN (Lost Apparition Records). His bone-grinding, brain-rattling bass tone is the nail that drives the band’s sound together, bridging the guitar tones into a giant wall of saw blades, pick-axes, and sledge-hammers.

“Ski”, as he’s affectionately known by friends and fans, uses the DNA-800 to deliver that tone with more than enough power and clarity. It’s great for the road, which is where the band spends a great deal of their time, especially for a death metal band on a small indy label. The DNA-800 is super lightweight and tough as Hell, so it’s ideal for travel, and makes it easy for Ski to cart it back and forth between home and rehearsal spots. It’s hard to find a bass amp that doesn’t get muddy when you start putting heavily saturated overdrives in front of it.

“The DNA stays crisp and keeps its bite and attack, while maintaining an abysmal depth in its clarity”, says Ski. Catch the DNA-800 and Ski in action on the road with Deathcrown, or with his other killer band CRUELSIFIX.