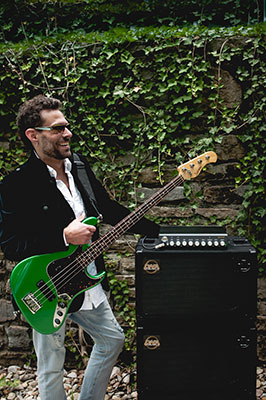 Adam Scovanner is a veteran of the Ohio music scene. The son of two College Conservatory of Music graduates, his musical journey began at an early age. Adam studied classical trumpet from age seven through high school, but his career path would be set into motion from age eleven when he started sneaking time with his dad’s 1975 P bass in (and occasionally out of) the family music room. As a teenager, Adam gained attention quickly in the Cincinnati-area music scene and has since built an impressive resumé that includes time with some of Ohio’s most beloved bands, such as The Goshorn Brothers (former Pure Prairie League), The BlueBirds, and The Menus. Currently, Adam performs with The Ultra Sonics, Cincinnati Transit Authority, Catalina Wine Mixer, and is the first-call electric bassist for pops shows by the Kentucky Symphony Orchestra’s “Boogie Band.”

About his new DNA rig, a DNA 800 paired with two DNS 110 cabinets, Adam says, “In my 20+ years as a professional musician, I’ve learned that in order to be successful one needs to show up on time, be prepared, play nicely with others; these are all no-brainers. But having dependable gear and great tone – these are just as important. David has always been at the forefront of great designs and I used almost all of the old Eden stuff at one time or another, but he’s taken a giant leap forward with the new stuff. My new club rig is nothing short of fantastic. I’m proud to be a part of the DNA family and I look forward to expanding my DNA arsenal!”