DNA Artist of the Month 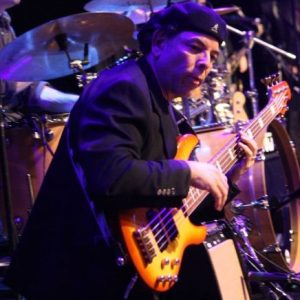 Born & raised in the Canal Zone/Republic of Panama, Mahlon started playing bass professionally at age 13 He worked with high profile local bands, cutting his teeth on late night gigs, recording dates, and performing in music videos for primetime TV. At 17 he moved to Los Angeles, quickly started performing on the L.A. music scene and became a regular performer on the Southern California club circuit opening for national acts, recording on film scores and CD’s with a variety of artists.

Hawk is an Emmy-Award-Winner, bassist, performer/singer/songwriter/arranger. He is all about laying down lines that groove. Mahlon combines diverse styles of rock, jazz, pop, fusion, funk, blues and Latin utilizing his bass to create original compositions and new arrangements. He’s all about making it fresh and exciting!

Mahlon has shared the stage with many professional musicians throughout his musical journey. Some of those include guitarist Jeff Skunk Baxter of the Doobie Brothers, drummer Bernard Purdie of Steely Dan, the entire horn section of Tower of Power, the entire percussion section of Ruben Blades, drummer Johnny “Vatos” Hernandez & guitarist Jeff Rubin of Oingo Boingo, drummer Oscar Seton of George Benson, guitarist Elliott Easton of the Cars, and many more.

“I discovered Eden Electronics in 1992. As a bassist, I’ve always been searching for the best amps, cabs, cables, etc, looking for smaller, more powerful, deep tone with clarity and punch. I found it when I played my first gig through the best in the world – Eden. I wanted to tell the world about David Nordschow and the most amazing breakthrough since the SVT. I met David at winter NAMM 1993. I have always and will remain thankful for David’s grand contribution to the bass world, and his openness and friendship to me. David continues his legacy with his latest contribution to the bass community – DNA Amplification. My approach to bass is unique to me and others who work with me. Eden/DNA makes it fun and enjoyable!”