It’s All In The Genes

We have been stocking the DNA bass cabinets and waiting for the new DNA-1350 amp here at Discovery Music in Calgary. For those who are into bass gear this stuff has a pedigree. David Nordschow (the DN in DNA) designed for SWR among others in the seventies including designing and building the first 4×10 cabinet for bass which transformed the sound of electric bass. He then founded Eden Electronics which was the first choice for most professional bass players for its great sound, ruggedness, reliability and versatility and was the gold standard for backline in North America for much of my playing career.

Mr. Nordschow is now producing the DNA line near Chicago. It embodies his unique experience and the latest in design technology. I finally had a chance to use the DNA gear myself on a gig this weekend. It was a typical pub gig with a trio I had not played with before at a venue I was not familiar with doing classic rock and country cover tunes. A typical weekend casual gig but it couldn’t have been more perfect for giving this bass amp a real world work out. I took the DNA-1350 head which is an accurate prototype of the soon to arrive production model, a DNS410 cabinet and my ’91 Sadowsky New York bass. 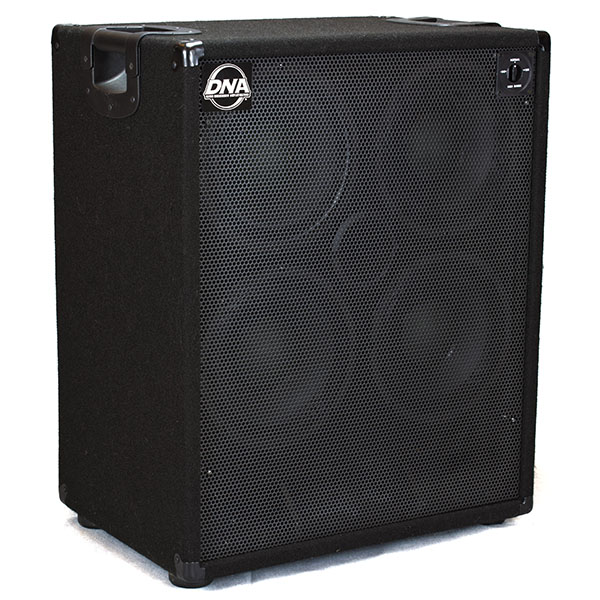 Taking A Look
First a word about the amp. It’s light and compact with a modern and business like appearance that will age well. Everything feels as it should. The rotary controls are very smooth and solid, push buttons have a precise light feel and everything is laid out logically. A note here on the rotary control knobs. They are a fluted design that is surprisingly pleasant to the touch and require very little pressure to grasp and turn. Since we bassists are such a tactile bunch it was an appreciated little luxury that few manufacturers would have considered.

It has every type of connection on the back for side chain FX, pre tone FX, slave out and in, tuner out, and auxiliary inputs which I found very handy. Just plug in computer or Pod type device, blend with bass, plug headphones into DNA amp and you get an awesome sounding practice setup that’s light and easy to use. It can also be useful in the studio. Put your monitor send through the aux and you can EQ and blend your bass sound and level to your liking in your headphones. There is a DI output and Speakon and quarter inch speaker outputs.

The front panel has input gain, shape control, four EQ controls, a level control for the Aux input and a master level.
Top row is a -12db pad switch, DI level adjustment, side chain level adjustment, DI pre/post, FX on/off and a very nice and simple compressor with adjustable threshold and ratio. A bypass switch is next for those who don’t prefer compression.

There is a well thought out footswitch option. The FX on/off, Compressor bypass, EQ bypass and Shape on/off can all be controlled by footswitch providing a variety of options for on the fly tone shaping.

Finally there is a very nice feature, a standby switch that leaves the pre amp operational and the power amp off. A lovely thing for studio work. There is also an amp management section to inform you of self-check mode, protect mode or output peaking. With 1350 watts available I never saw the peak light flash! A good read of the manual will help with getting everything out of this little beast. The DNS410 appears to be a very solid speaker box, the front grill is sturdy and has a small rotary control in the upper right hand corner (on the FRONT of the cab, where it belongs). The black carpet covered box is reasonably light for what it is with big handles on the top corners for a comfortable lift and large rubber feet.

Test Drive
At the gig the stage was large and hollow underneath. The room was long and rectangular with windows down one side, a wood floor, TV screens everywhere and it was noisy. Not the best acoustic environment. PA was minimal but with very loud and clean monitors. The bass would be coming from the stage as the kick drum maxed out the bottom end of the small system. A quick line check and off we go.

I set the amp flat with the shape control at 10 o’clock and the tweeter on the cabinet in the normal range. A slight bass boost on the Sadowsky and volume up. The sound was detailed and even with an extended and clean low end that I didn’t expect due to the hollow floor. The thick rubber feet did their job nicely decoupling the cabinet from the stage. Did I mention the gig was loud? I turned up significantly and all I got was louder. No compression, no breathing, no rattles or buzzes, no change in tone, just more. The dispersion of the midrange was wide, meaning everyone else got a good sound too and the warmth and punch survived in spite of the windows and hard surfaces. The DNS410 is tight, well-crafted and efficient.

Now the tweeter. I don’t care for most tweeters in bass cabs. They sound metallic and peaky to me. I know the slap guys and the rock pick players like the extended range and even some finger style guys like the “leading edge transient” but I have always liked the sound of a cone speaker especially with smaller drivers that have good upper mid response. If I want a little punch to the note I prefer a bit of crunch or ‘hair’ on the beginning of the note. Yeah I know, pretty old school, but I digress. More on this later.

The DNA tweeter made a convert out of me. I simply didn’t notice it was on. It was smooth and transparent and added sparkle to slap parts and crispness to pick playing.

The level control for the tweeter is on the front of the cabinet. This allows me to experiment with tweeter level versus treble control setting. They behave differently and I soon found a perfect balance. Not really do-able with a rear mounted control.

In the second set I had the chance to play with the tone controls on the DNA-1350. The EQ points are well chosen and the controls are surgical in their precision. A small adjustment makes a difference, however even large amounts of EQ still yielded musical tones. The shape control is not simply a smiley face knob. It does other subtle things and I found it very useful.

Something Different
OK now the interesting part. Without a boring lecture on gain structure this amp is just different. You adjust the input control to light up a small green light. You want to light up that little light! This is not a peak indicator and I found it impossible to overdrive this input. However I did find it possible to ‘push’ this input to give me a little growl, a little ‘hair’ on the note. The guitar player noticed it right away and asked me if the amp had a tube input. Nope. No loss of high end, no compression of the huge lows, just a beautifully designed input section that adds another dimension to the great tone this head can produce.

Did I mention this gig was loud? After the second set some friends of the guitarist/singer commented on how well balanced the sound of the band was and how nice the bass sounded. One of the musicians in the party commented how the slap parts stood out nicely but not harsh, and how big and tight the low notes sounded with nice definition in the mix. I told him the bass wasn’t in the PA. “That’s straight off the stage? Wow!”

This brings me to another observation. The Sadowsky is basically a jazz bass setup but I usually leave the pickup balance control in the center position on live gigs as I have never been able to get a front pickup only sound that wasn’t just mud or a mostly back pickup sound that wasn’t too thin without some adjustments. In the studio these options seem usable with little messing around. The DNA setup is the very first rig that gave me these options live. Front pickup was deep and round with big fundamentals but with a nice upper mid string sound that defined the note and gave it some air. A mostly back pickup setting had huge definition and punch but with a nice full lower register present. Panning the pickup knob yielded a selection of usable and musical tones previously not available live.

Conclusion
At the end of the gig I packed up this little six pound monster and it wasn’t even warm. The smooth and robust DNA cabinet weighs substantially more than six pounds but a lot less than other 410’s that I didn’t buy because they were too hard to lift into the trunk. Are there any cons? Well the feet on the DNA-1350 could be a little thicker. The amp bottoms out on a cabinet with a top mounted handle. The graphics on the face could have more contrast so they are easier to see in dim light, but my age probably has something to do with that and a little more familiarity with the amp would solve the problem anyway.

That’s about it. The DNA gear is priced competitively and I found it to be a good example of “Ya get what ya pay for”. This rig just feels good. It makes everything easier. If you have been playing for a while you know what I mean. It responds to what you do and gives you what you need and after a while you just forget about it and play music. It becomes part of your instrument. It becomes part of your, well, DNA.