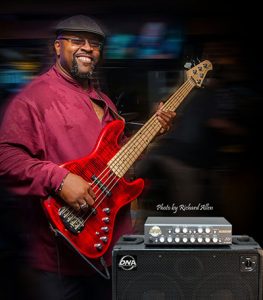 William E. Hutchison, Jr. from Waukegan, Illinois has played major music festivals such as Country Thunder, Country USA, Summerfest, and The Taste of Chicago. As a bass player, William has toured internationally. He’s a versatile bassist who has played all styles of music from Classic Motown, R&B, Jazz, Blues, Gospel, Country and Classic Rock. He has played in acts that have opened for Rascal Flatts, Keith Urban and Tim McGraw.

Of his DNA rig, he says:

“What I love about David Nordschow’s DNA is that it doesn’t get in the way of my bass guitar’s tone. My sound is in my fingertips… in my touch. Every ounce of sweat that I pour into my playing… my DNA 1350 and cabinets deliver with power, clarity and transparency!”