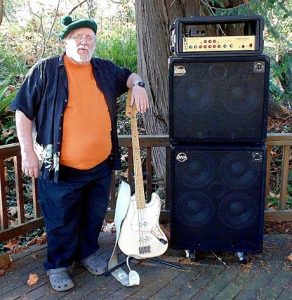 Dan started playing bass in 1965 at the age of 15. In 1966 he performed in public for the first time and also purchased his 1965 Fender Jazz Bass. He played that bass with high school groups and college groups. In 1971 he joined a nightclub group, The Young Century’s. They toured throughout the western and mid-western US playing 5-nights a week, 50-weeks a year, for the next three years. He became very familiar with the neck on his ’65 Jazz Bass!

He met his wife while touring and was married in 1972. In 1973 they had a daughter and in 1974 he stopped touring and got a “real job”. He continued to play weekends and did some recording for ATCO with a group called the LA Smogg. Then in 1976 his house was burglarized and all his musical gear was stolen, including his “beloved” 1965 Jazz Bass.

The next 20-years were spent raising a family and although he was able to buy his current white Jazz Bass in 1985, it wasn’t until 1997 that he really got to perform with it again. Then in 1998 he was transferred to Vermont to become the webmaster for The Orvis Company. While Dan was in Vermont, his bass stayed pretty quiet. The family then transferred to Virginia in 2005 and about a year later he picked it back up to play for an Orvis Company assembly for 600 people.

An impromptu group of musicians was put together within the company to play a couple of songs at the beginning of the assembly and then various snippets of music as each “guest” was announced ala “Tonight Show” style. Not long after that he was invited to play in “The Mid-Life Crisis” rock band in Roanoke, VA. Later he played with “Tuesday Night Pancake Club” and finally “Other People’s Kids”. 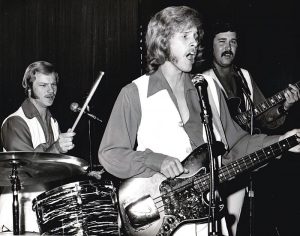 “The Mid-Life Crisis” had a steady calendar of gigs and the money earned allowed him to slowly start upgrading his bass gear back up to the pro-level he had in the 70’s. He gigged quite a bit with his first Eden amp, the Nemesis RS400. Then Dan procured an 800-watt Eden amp (WT500/800) directly from David Nordschow (founder of Eden and DNA) in 2010. As David released his first DNA cabs, Dan decided he had to have that DNS410.

In 2015 Dan retired from the Orvis Company and moved back to the West Coast. Since his wife had lived in the area and gone to school in western Washington, they decided to move to Duvall, WA. Just 2-days before they left Virginia to head to their new home in Washington State, Dan’s new DNA bass cab, the DNS410, arrived!

Dan was itching to play in a group again. The drummer from the Blues Phoenix Project contacted him and shortly thereafter joined the blues/rock trio. Dan sings many of the rock songs and a couple of the blues numbers. He was also invited to join a 5 pc. Classic Rock group “The J. Badders Band” about a year later and has been gigging steadily with them since 2016.

The latest addition to Dan’s DNA arsenal is the amazing DNS210 cab which he plans to use for small and medium sized venues and reserve his DNS410 for larger clubs, outdoor venues, and outdoor Festivals. The first time he rolled his DNS410 into a local Brew Pub, the owner’s eye’s got really big and he said, “that’s way too big for here.” He shouldn’t have that “scared the owner” problem with the DNS210. It’s a lot of sound in a smaller package!