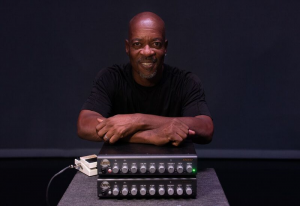 Cecil “C.C.” Thomas Jr. was born and raised in Detroit, Michigan. After picking up a bass for the first time at the age of fifteen he was consumed with his passion for music. It was a passion that would become the fuel for his musical career and journey. After only one year of self taught study in the birthplace of Motown he began playing Jazz and R&B with the older established musicians in the Motor City at the age of sixteen. They were instrumental in his rapid musical development and helped to lay the foundation of things to come.

After graduating from high school in Detroit C.C. moved south to Nashville to attend Tennessee State University. Although he was an electrical engineering major upon arrival his passion for music would soon remove him from the study of math and circuits to the study of harmony and melodic structure. It didn’t take long for the local music community to take notice and soon he was working with many of the established artists and musicians in the city. It was in Nashville where gospel and country music also became a part of his musical DNA. Working with such diverse artists as Andre Crouch to Pam Tillis added a broader range of musical versatility to his already rich R&B and Motown background. It was also in Nashville where he would meet the legendary producer and songwriter Skip Scarborough (Earth Wind and Fire, Anita Baker, The Emotions, Bill Withers). This meeting would once again change his course in music and lay another layer of foundation for things to come. While recording a project for a local band that Skip was producing C.C. was able to spend a month talking to and observing Skip execute the production and songwriting process from start to finish. It was that experience that sparked his desire to not just play an instrument but to produce music and write songs as well. 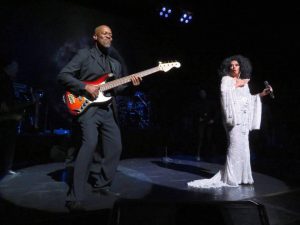 Shortly after that experience C.C. moved to Cincinnati Ohio. It was there that the beginning of producing and writing music finally took hold. While in Cincinnati, C.C. began to hone his production and writing skills. He also started to acquire the equipment necessary to build the foundation for his recording studio. While in Cincinnati he worked with artists such as Midnight Star and The Deele. It was these relationships that would eventually lead him to L.A. He also served as musical director for a 14-piece band called Jam Factor, which supported artists such as Color Me Badd, Eddie Money and Lee Greenwood.

At present C.C. Thomas Jr. is a professional musician now living and working in Los Angeles, California. He is touring with and is the musical director for Diana Ross. He also travels and performs with various artists both internationally and locally. He writes and produces music and has been nominated for an Emmy Award for “Outstanding Song”. He has worked with many other diverse artists such as Babyface, TLC, Jeffrey Osborne, Dave Koz, Smokey Robinson, Stephanie Mills, Howard Hewitt, and Freddie Jackson to name a few. He is the co-director of the Raffia Music Studio music school located in Lomita California. He owns and operates a business and recording studio under the name of Sound Vision Entertainment Inc based in the Los Angeles area.

“As a musician one of the most important steps you take in your development is defining your sound. When I play I want people to not only hear what I’m doing but to feel it as well! When I heard myself playing through the DNA gear it sounded awesome but it was what I felt that made me choose it! This gear resonates with my soul!”