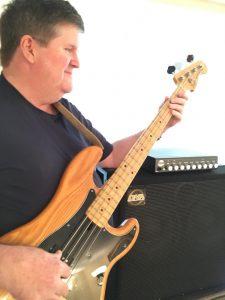 I play the DNA-1350 amp mostly flat. David has absolutely dialed in a killer tone. Fat and punchy. It sounds great to me and cuts through the mix extremely well. I use the onboard compression for slap. It’s extremely subtle and musical. I’ve done away with my external compressor. One less thing to carry. I just pull the knob or use a footswitch to take compression out for finger style. It’s so simple.

I started with the 4×10 back in 2010 or so when David wasn’t making amps yet. When I did my first gig with that cabinet at a casino in California I was almost brought to tears by how loud and fantastic the sound is. I’ve played through just about every cabinet you can name. I play so much better when the sound I get is what it ought to be. The DNA sound is my sound. I also use the 2×10 and 800 amp. That amp is unbelievable. No fussing.

I have a steady jazz gig with the Swing Reunion Orchestra. I also play from time to time with a couple of other big bands here in Seattle: The Magnolia Band, the Jazz Police, the Mojo band. The Jazz Police is a more avant grade big band. Hard charts and a whole lotta fun. I play with the Stevens Septet with some serious jazz players. I also do The Candy Shoppe gig. I just joined them and am learning a bunch of Abba tunes and stuff like Love Shack. From time to time I work musicals. I’ve recently done a run of Scrooge. I’ve also done lots of studio work on commercials, jingles, and movies. I’m just as happy to play whole notes as I am funky Rocco stuff. Whatever serves the song is what I want to do.

Jazz, country, polka, latin, rock, blues, show tunes, pop, disco. It’s all good. In my younger years I was a bit of a snob, but I learned my lesson. I grew up thinking that Country was somehow too simple and not good. Then, at the age of 23 I found myself on Hee Haw with the Osmond Brothers playing country music. I’d been wrong. Country has a vibe and to play it authentically isn’t simple. Minimalism reigns, so every single note needs to be carefully chosen and played with taste and conviction. Being able to read chord charts, notes, complex rhythms, Nashville changes, or play with no charts at all have really helped me stay busy over the years. I work as hard as I can to play every kind of music on every gig with respect for the genre.